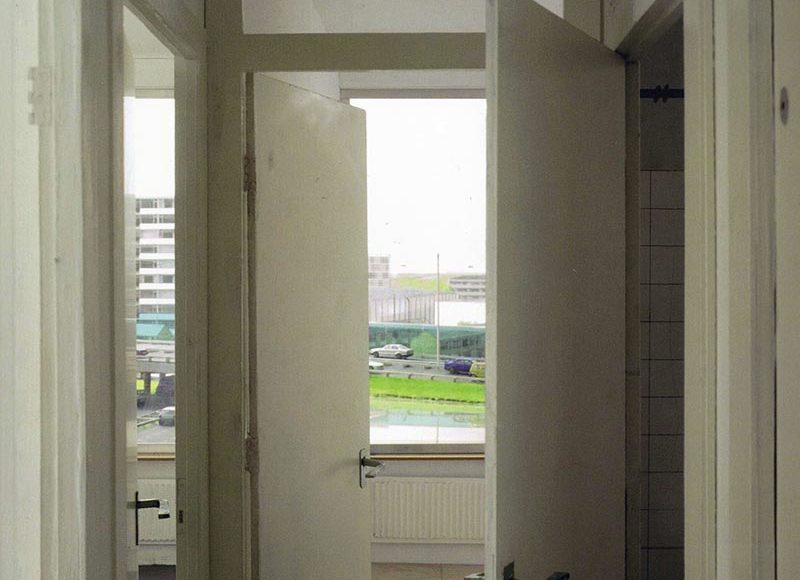 Denis Rouvre, Mathieu Amalric
Although the 6th year of the photography festival Transphotographiques took place between May 10 and June 17 in several cities in the North of France and the South of Belgium, its main hub was in Lille, an agreeable and lively town with a sprawling historical center located about half-an hour by TGV from Brussels, and an hour from Paris. Directly across from the main station is the spacious building Le Tri Postal, formerly a clearinghouse for the post office, now reconstructed to house enormous exhibition halls. 26 of the festival exhibitions were held there, with others at the grandiose Palace des Beaux Arts, a former monastery hospice, as well as in several churches, Lille’s Maison de la Photographie, and various galleries.

Under the leadership of festival president Bertrand De Talhouët and director Olivier Spillebout, the organizers chose a single theme for most of this year’s roughly seventy exhibitions: photography and cinema. They did not display much originality here, for the same subject had already been broached at the Months of Photography in Paris and Moscow, as well as at other festivals. In Lille, however, they decided to focus on the relationship of cinema and its elder sibling, photography, from various aspects, not just the usual exhibitions of portraits of star actors or directors, but also through images of cinemas in various countries, location shots from film productions, staged photographs reminiscent of film scenes, descriptive pictures of film sets where famous films had been shot, photo-sequences and paparazzi-like photographs from the backstage of the Cannes film festival.

The main focus of attention was naturally placed on portraits of illustrious figures from both the history and present of the cinema. Among the best shows of this kind was the exhibition selected by Gabriel Bauret from the archives of the Maison Européenne de la Photographie in Paris. This combined sixty-year old idealized glamour portraits by George Hurrell, excellent photographs of Jean Marais, Jean Cocteau, Jean-Paul Belmondo, and other French celebrities by Raymond Voinquel, as well as provocative, erotic portraits and nudes of Charlotte Rampling, Catherine Deneuve, and Ava Gardner by Helmut Newton. One of the festival’s largest exhibitions presented the oeuvre of Leo Mirkine, who between 1936 and 1988 created 120 thousand production stills from the sets of various films, and from the 1950s onward also photographed on the beaches of Cannes, and at its opulent receptions, the then-emerging generation of actors, who were only just becoming international celebrities: Brigitte Bardot, Sophia Loren, Gerard Philipe, and Alain Delon. It is beyond doubt that Mirkine’s fresh and immediate photographs, widely published in the press of the time, contributed to their rising fame.

However, the trouble was that pictures of the very same actors appear-ed too many times in Lille – in the exhibition of smooth portraits done by the Harcourt Studio, nostalgic pictures from the Cannes festival by the Dutch photographer Sem Presser, or reportage images from the same location by Michel Johner. Most visitors probably viewed the first five pictures showing the charms of the youthful Brigitte Bardot with great interest, but when such analogous portraits began to appear in endless variations, they soon become stereotypical and tiresome. Many faces recurred also at the exhibitions of the portraits of contemporary stars of the screen. Among the best were the imaginative arranged photo-graphs done in color by Denis Rouvre, the more traditional portraits by Sebastian Copeland, and the more expressive black and white photo-graphs by Jerome de Perlinghi and Patrick Swirc, mounted on black panels and enhanced by spotlights. Swirc’s photographs in particular, with their unflattering and at times naturalistic bent, with their merciless articulation of every wrinkle and hair, as well as the fact that the prints contained also the edge of the film material, were reminiscent of the portraiture style of Richard Avedon.

The most original portraits of cinema stars, however, were featured in the exhibition of the famed German photographer Peter Lindbergh, held in the crypt of Notre Dame de la Treille. Similar to Antonin Kratochvil, Lindbergh prefers black and white and unconventional compositions in his quasi-reportage pictures: Hilary Swank is photographed from the back, perusing the negatives of her portraits, Catherine Deneuve is portrayed through daring details of face and feet, Isabella Rossellini is seen walking her dog on a street in New York. He also did not shirk from an unflinching portrayal of old age, as is evident in his evocative portrait of the wrinkled face of the grande dame of

French cinema, Jeanne Moreau. His exhibition included several pictures treating the gloss of the cinema world with a certain irony, as for in-stance in the rear view of the spray painted and overgrown letters of the giant Hollywood sign on the hills above Los Angeles. The resourcefulness of Lindbergh’s works stood out in comparison with another exhibition mounted in a church, this time in the St. Maurice, where Francois-Marie Banier resorted for the most part to the forced grimaces of long-serving French actor Daniel Emilfork. Fortunately, there were a number of other exhibitions at the festival. There was the excellent and sociologically eloquent collection of photo-graphs of various cinemas in Cuba, Texas, Morocco, India, the Dominican Republic and other countries, by Stephan Zaubitzer. There were Denis Lenoir’s spectral shots of empty interiors – the sets of various film scenes, as well as impromptu photos the shoots of Stefano de Luigi’s porn films, which spoke volumes, but which were nonetheless reminiscent of similar photographs by Larry Sultan. The power of the photo-graphs in which Paolo Ventura, inspired by puppet films, staged every-day scenes from the Mussolini era in Italy by using tiny figures has already been tested at photography festivals in Arles and Krakow, and even in a solo book. In the row of Lucien Clergue’s descriptive images from the staging of Le Testament d’Orphee the ones that stood out were several evocative portraits of its author, Jean Cocteau. The theme of the relationship between photography and cinema was attractive – it did not fail to draw large audiences (outstanding promotion throughout the city naturally also helped, as well as the fact that admission to all festival exhibitions was free of charge). Still, as a solitary theme for a large photography festival this also proved too narrow, as many topics kept recurring and a number of exhibitions showed little of current tendencies in photography. Fortunately, the program included a host of innovative exhibitions by young artists working outside of the main theme, photography projections and film screenings, discussions, presentations of other European photography festivals, and a well organized portfolio review. After an interval of one year, Transphotographiques thus returned to assert its place among the foremost photography festivals not only in France, but in Europe as a whole. In fact, this summer its international character will be enhanced further by a new photography festival in the Polish cities of Gdansk, Gdynia, and Sopot, to the organization of which Transphotographiques will contribute significantly. 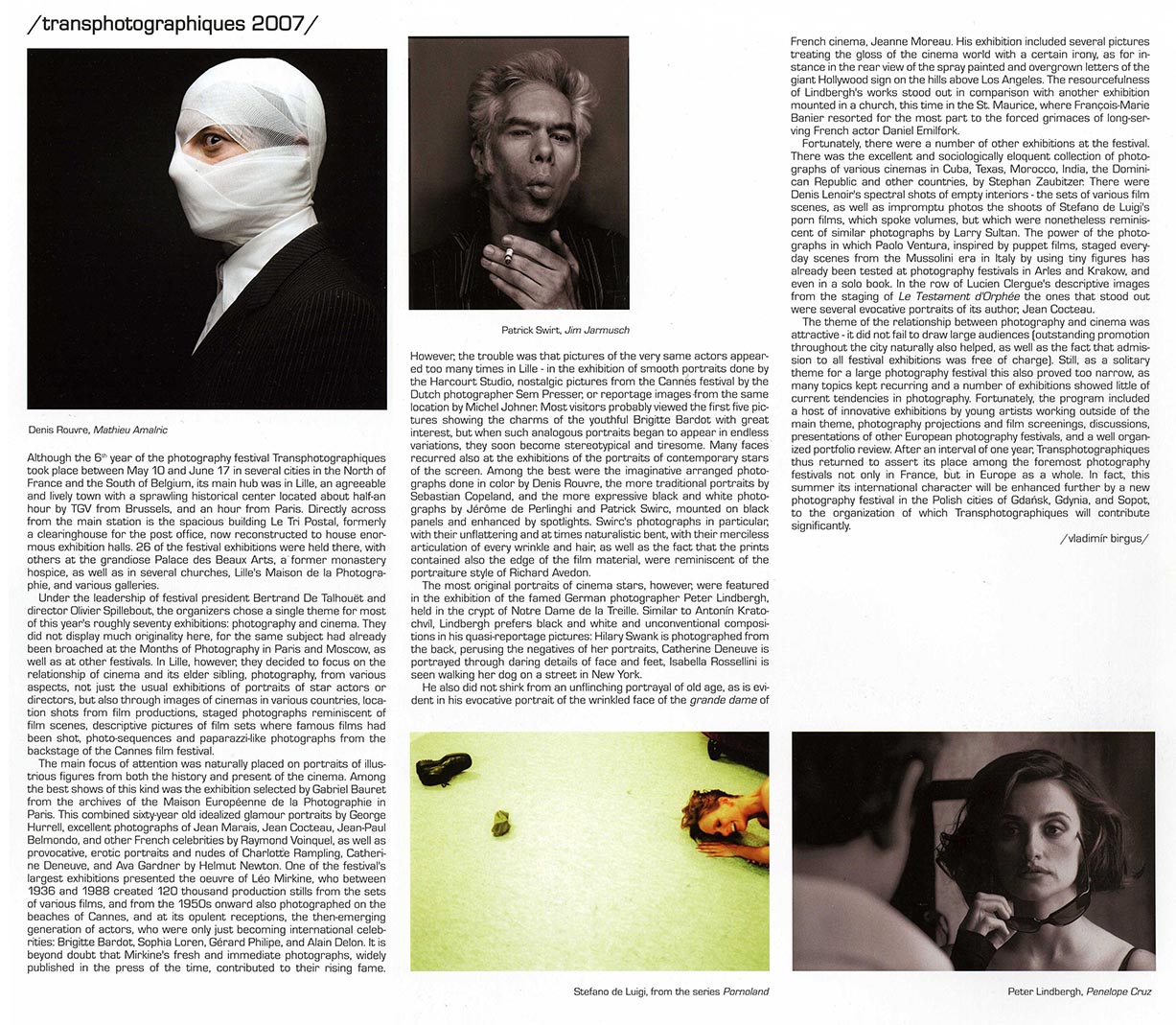 Written by Arnaud B